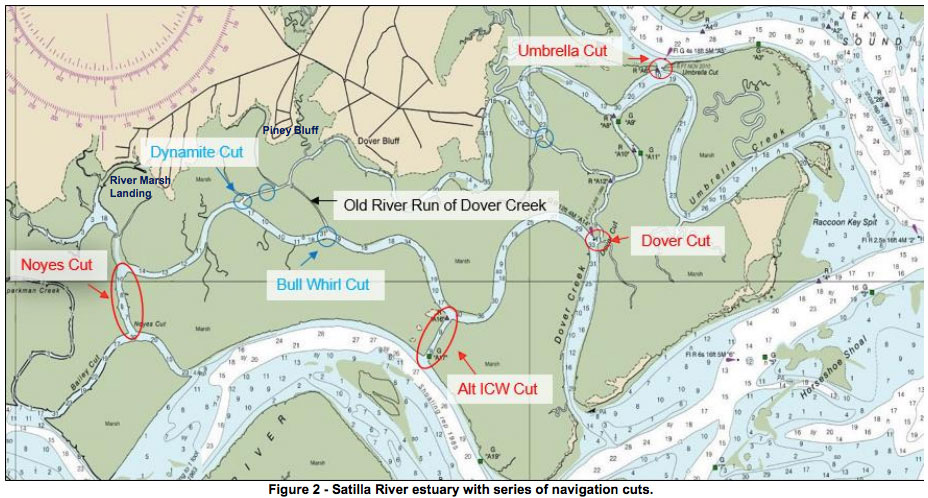 Like all of Georgia’s coastal rivers, the Satilla has served as a pathway to the interior for hundreds of years. The early Native Americans hunted in its rich forests. In the 1500s, the French explorer Jean Ribault called it “Riviere Somme,” a name honoring a similarly tranquil river flowing through French Picardy. The Spanish, who set up a chain of missions along the southeastern coast, named it St. Illa in memory of one of their officers. With the defeat of the Spanish, the English fur traders kept that name but anglicized it into its current pronunciation.

Regardless of what it was called, the Satilla provided the avenue for goods to move upstream to settlers’ outposts and a way to bring goods to market. From the mid-1700s to 1860, the Satilla’s bottomlands nurtured a tidewater rice culture whose productivity rivaled the tonnage produced in the Savannah area. After the Civil War, the logging industry used the Satilla to transport timber downstream for export around the world. As a vital waterway for trade, the Satilla was not immune to human interventions designed to speed up the transit of traffic upstream and down.

One example is in the Satilla estuary where, from 1900 to 1939, eight shortcuts were made between natural channels to increase the accessibility to tidal creeks for the timber industry and to provide a safer inland route for small watercraft. Because these cuts altered tidal flow and the course of the river itself, portions of the Satilla began to fill with sediment. Additionally, changes in salinity adversely affected migratory fish, shrimp, and shellfish which formerly supported a valuable commercial and recreational fishery.

To address these ecological and economic impacts, the U.S Army Corps of Engineers (USACE) collaborated with state and local groups to assess the feasibility of restoring the Satilla to its former flow regime. In June 2018, the Corps released a study evaluating the closure of Noyes Cut, a shortcut originally created as part of the Intracoastal Waterway but which was obsolete as far back as 1939. By halting sedimentation in the tidal creeks, both fish and boats once more could have access to the upper reaches of the estuary at low tide. Additionally, the restoration of normal saltwater gradients would improve habitat for migratory and resident fish, crabs, and shrimp, and restore over 4,500 acres of essential fish habitat.

The total project cost is $7.6 million, with the Corps contributing 75 percent and a required 25 percent non-federal match of $1.9 million. The Satilla Riverkeeper has applied for a “Conserve Georgia” grant through the DNR’s Georgia Outdoor Stewardship Program to help with the Noyes Cut restoration costs but still seeks support for the project from private donors. Donated funds can be spread over a three-year period. If you are interested in supporting this highly collaborative project whose goals align the interests of local residents and fishers, the environmental community, fisheries managers, and USACE, please contact Laura Early at (912) 462-5094 or riverkeeper@satillariverkeeper.org.

Land Protection on the Satilla: An Update on Cabin Bluff
Scroll to top