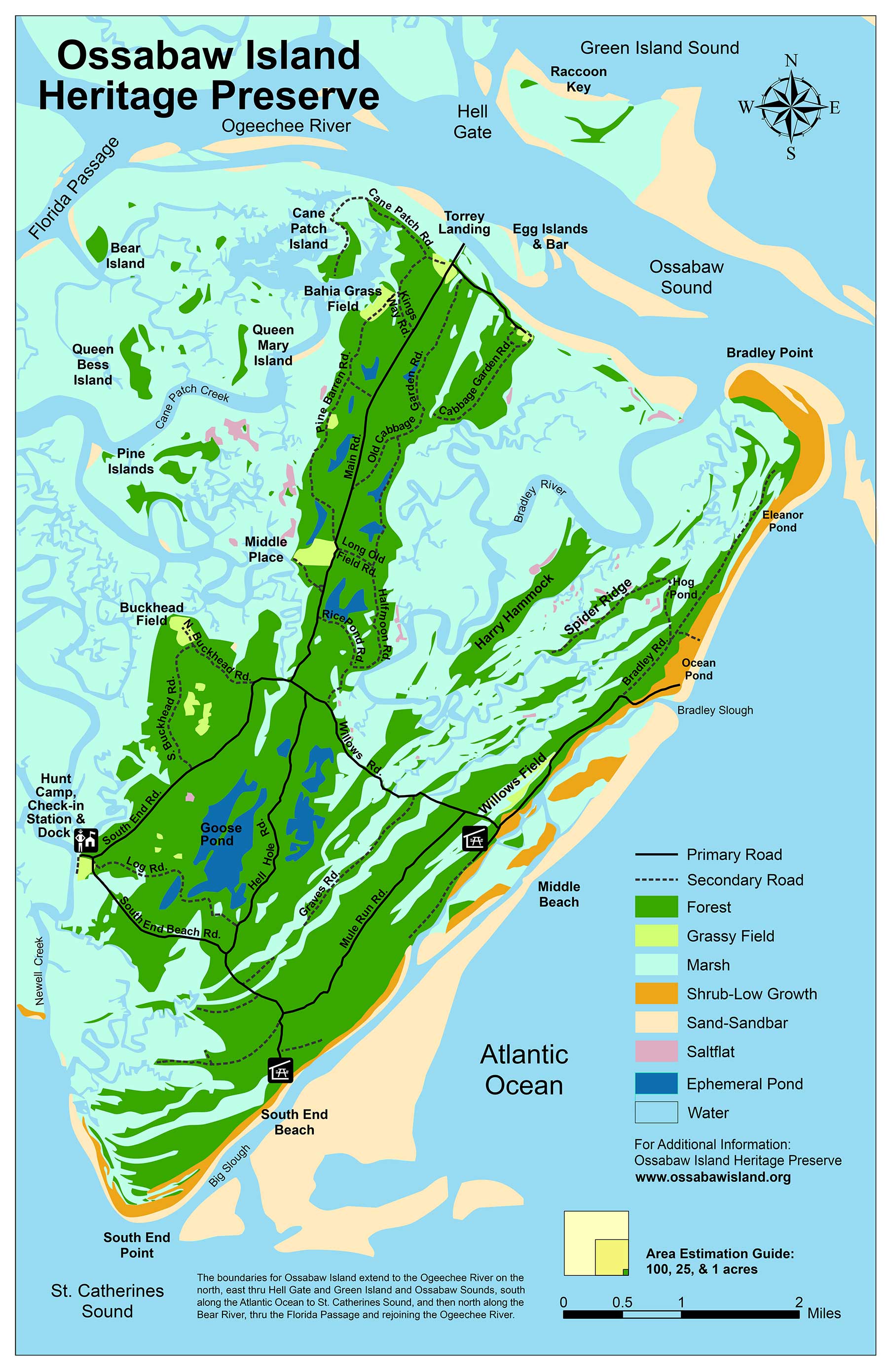 We may give a name to an island but we are defined by the imprint it leaves on us.

Humans have been part of the Ossabaw landscape for over 5,000 years. As they did on many other Georgia barrier islands, native peoples left behind evidence of their occupation in the form of shell middens, mounds constructed largely of oyster shell left over from seasonal feasting. These mounds also served as burial sites for their kin; in four Ossabaw mounds dated at 1100-1300 C.E., archaeologists found dogs interred there as well. Although much of the shell material later was mined to build tabby structures and to surface sandy roads, in places you still can stand on the remains of a midden bordering a tidal creek and contemplate a landscape across the centuries. Often there’s a clump of red buckeye growing close by; it’s not a coincidence. The native peoples used buckeye sap to stun fish so they were easy to harvest in these calm backwaters.

By the 16th and 17th centuries, coastal natives would have seen French sailing ships mapping the Georgia islands and naming its rivers after those of their homeland. Likewise, the Spanish continued to explore the islands of “La Florida.” Although they established a mission on St. Catherines Island to the south, on Ossabaw the Spanish seemed to be just passing through. So far, only a few pottery fragments from broken olive jars reveal their presence there.

Once the English settled their boundary wars with Spain, Ossabaw’s natural resources became a magnet for a series of landowners. Its live oaks were cut for valuable ship timbers; a few ships were even built on Ossabaw, right next to the lumber supply. Forests growing on the rich soils in the island’s interior were cleared first for indigo culture, a blue dyestuff highly prized by the British. Then, in the 1800s, four plantations switched crops to grow the pride of the Georgia coast: long-staple Sea Island cotton. Whatever the crop, plantation owners relied on the labor and skills of enslaved Africans. Today the restored slave dwellings at the North End site bear witness to the presence of the enslaved on the land.

During the Civil War, everyone abandoned Ossabaw for the relative security of the mainland. Once emancipated, the freedmen established their own mainland communities at Pinpoint and Sandfly, while a few returned to live and work on the island as Ossabaw changed hands many more times. Finally, in 1924, the entire island’s 26,000 acres were purchased for $150,000 to serve as a winter home for the Torrey family. While the fate of Ossabaw has lain in human hands for centuries, its conservation from 1959 well into the 21st century was guided and inspired by Eleanor “Sandy” Torrey West, who died on January 17, 2021 — on her 108th birthday.

In a conversation I had with her in 2003, Sandy said that at first, she hated Ossabaw. Each year, her family left Michigan to spend the winters at their home near Thunderbolt. Following a disastrous house fire, however, her parents bought Ossabaw and moved the family there. Sandy resented being separated from her Savannah friends so much that at the conclusion of the storm-tossed move aboard a dangerously listing boat, the 11-year-old spat on the ground as soon as her feet touched shore. Fortunately, after only a week or so, in her rambles with her brother, Sandy came to realize that she had found her place.

The Torrey-West family clearly was committed to conservation at Ossabaw. Spearheaded by Sandy, their philanthropic support was legendary in fostering interdisciplinary connections between art and science at this island retreat. In the mid-1970s, however, all that came under threat. Chatham County dramatically reappraised the island’s value, resulting in a proposed astronomical increase in property taxes. With the leadership of Governors Jimmy Carter and George Busbee, in 1978 the Georgia legislature created a new designation for protecting Georgia’s cultural and natural history: the State Heritage Preserve. At Ossabaw, the state took ownership of all 26,000 acres, while Sandy retained a life estate in the family home and the 23 acres immediately surrounding it. Sold by the Torrey-West family to the state for $8 million dollars — half its assessed value — Ossabaw was the first of today’s 122 State Heritage Preserves encompassing 335,000 acres across Georgia.

Under the umbrella of the Georgia Department of Natural Resources (DNR), the island is managed primarily by its Wildlife Resources Division. Ossabaw’s pristine shoreline plays a particularly important role in DNR’s Sea Turtle Conservation Program as illustrated by the 537 turtle nests counted there in 2020. Another major part of DNR’s role is the control of non-native species, specifically the Sisyphean task of reducing the population of wild hogs which severely disrupt both flora and fauna.

Another arm of management on the island is The Ossabaw Island Foundation (TOIF). Established in 1994, the Foundation was created to manage programming and facilities on the island and to serve as the steward of the Heritage Preserve. A challenge for raising public interest in the island is that getting to Ossabaw still takes an extended boat trip. To engage the public in their efforts, the Foundation provides a wide variety of programs to attract visitors, whether for a day trip or an overnight stay in the restored club-house. Restoration of the slave cabins has renewed connections between the Black community at Pinpoint and the island where their forebears lived. In keeping with Sandy West’s interest in the intersection of arts and conservation, TOIF offers writers’ retreats, nature study trips, workshops where people participate in the alchemy of creating indigo dye, and opportunities for artists to be inspired and create new works on-site.

Challenges still arise in maintaining the protected status of Ossabaw and other State Heritage Preserves. In the 2020 Georgia legislative session, an ill-conceived bill was introduced that would have permitted the state to subdivide and sell to any private individual or corporation up to 15 acres and structures for development in any Heritage Preserve. Unlike the 1978 Act, the proposed bill eliminated review of the transfer by the General Assembly and provided little opportunity for notice to the public. After an onslaught of phone calls, emails, news stories, and editorials, the bill failed when those promoting it could not find even one legislator willing to sponsor it in the State Senate. Without a doubt, good stewardship of Georgia’s Heritage Preserves has a statewide constituency who will respond in time of need.

In the wake of Sandy West’s passing, her home and 23 acres became part of the Heritage Preserve. Under a five-year renewable agreement between the state and TOIF, the Foundation now is coordinating and leading the management of the Torrey-West House and surrounding acreage. To support the maintenance and renovation of the house, several years ago TOIF created the Torrey-West Fund which continues to accept donations, especially memorial donations to honor Sandy West. In addition to grant support, TOIF hosts its signature fundraiser, the annual Ossabaw Island Pig Roast. Another popular opportunity for donors is the Adopt-an-Ossabaw-Donkey campaign. For many years the Sicilian donkeys on the island were an Ossabaw fixture. But from a herd of 11 introduced as pets for Sandy’s son, over time their numbers swelled to 150. To reduce the donkeys’ impact on the island’s vegetation, all but two have been re-homed on the mainland. But you still can “adopt” one, by making a donation to support conservation of the island’s natural environment.

In the words of TOIF’s executive director Elizabeth DuBose, “Sandy wanted Ossabaw’s visitors to be transformed by the island, not vice versa.” I experienced Ossabaw’s transformative power before I even met Sandy. 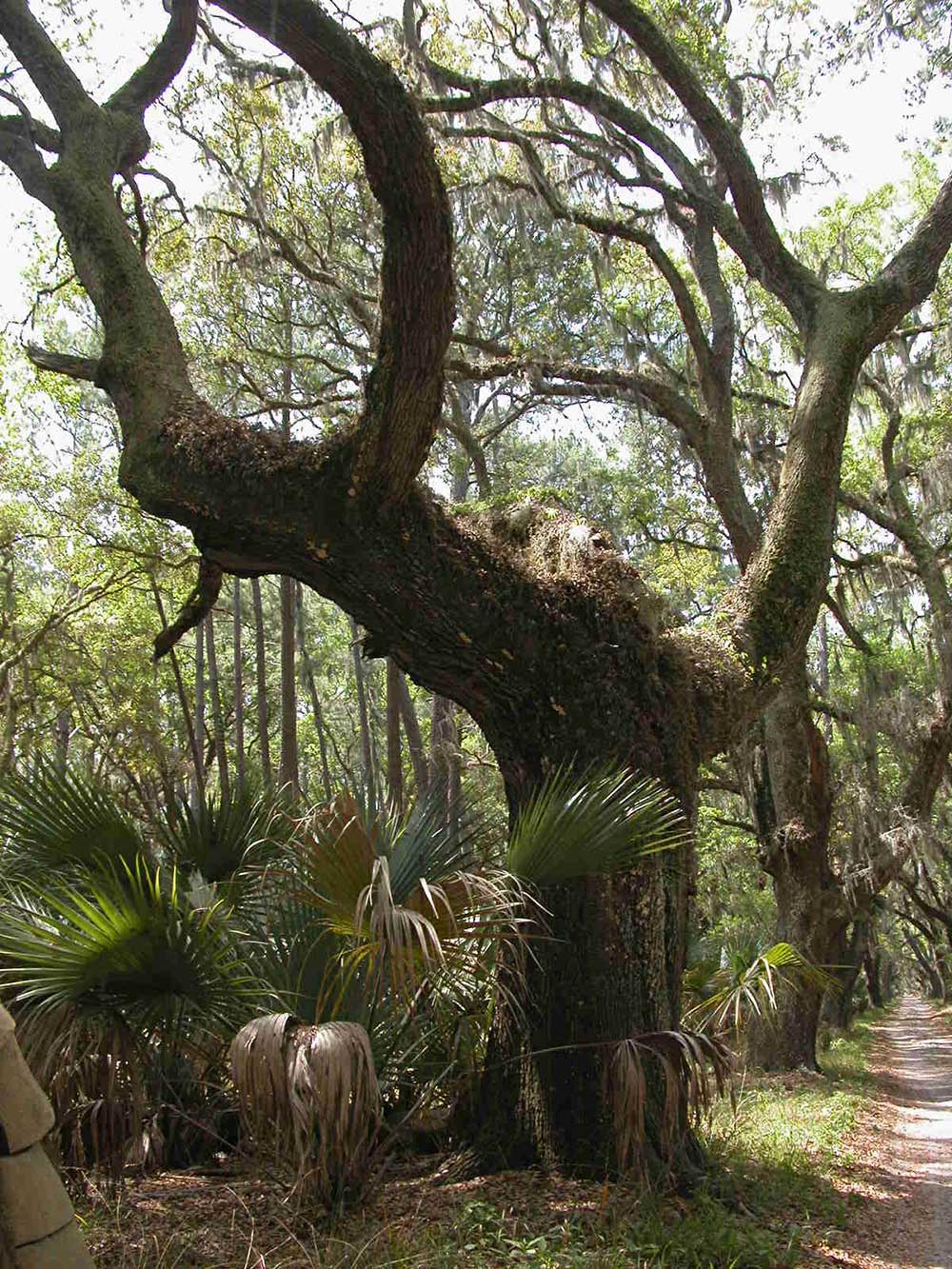 On my first visit, I came upon a weather-beaten but still majestic live oak. Although it had lost its crown, two great branches seemed to reach out like welcoming arms. Despite the passage of nearly a century since Sandy West’s arrival, the oak stands there in a pose both of praise and of summoning, asking our help to continue the stewardship of the only home it has ever known.