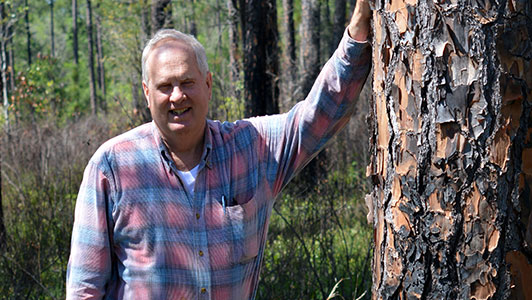 As a finance major at the University of Georgia (’77), Reese Thompson took part in a commodity markets class trip to Chicago where he visited the trading floor of the Chicago Board of Trade. In Thompson’s words, “There were 6,000 people on the trade floor, more than the small town of McRae, Georgia where I was raised. It was a beehive of activity. I was smitten.”  Not surprisingly, upon graduation Reese caught a ride to Chicago where Merrill Lynch hired him as a runner on the trading floor. There began a career in commodities trading. And yet, Reese always found his way back home to Wheeler County and the family’s farm where he managed to stay connected to the land.

Reese’s initial return to the family farm was under difficult circumstances.  After his Father suffered a heart attack, Reese returned home to help his brother, Frank, with the farm. They worked through the early eighties planting and burning longleaf, challenged by a long period of drought. Reese would return to Chicago and his fascination with commodity markets, but he eventually decided to make the family farm his home.

When asked about his longleaf “conversion experience,” Reese explained, “When I turned 50, thirteen years ago, I began wondering what my purpose in life was. After several people helped me understand the uniqueness and richness of biodiversity in the longleaf ecosystem, I decided my mission in life was to protect, enhance, and restore the longleaf that I had been entrusted. Planting longleaf is the closest to immortality that I will achieve. I had rather be remembered by family and friends as a good steward of the land, than CD’s in a bank.”

Restoration of longleaf requires a significant investment of time and financial resources. “A day on a tree farm is long.  And there is the cost of seedlings and wiregrass plugs, equipment and fuel,” said Reese.  “But I enjoy it.  The work is grounding and it gives me a sense of satisfaction for doing something good.”

“Reese’s passion is genuine,” said Dirk Stevenson, Longleaf Savannas Initiative Director for the Orianne Society, a group that works to conserve critical ecosystems for imperiled reptiles and amphibians. “There is a lot of support out there for managing land to benefit game species such as deer, quail, and turkey.  It’s not every day that you meet someone who is committed to helping non-game species like salamanders, tortoises, and snakes.”

The Orianne Society, which helps to conduct prescribed burns on the Thompson property, brings students and researchers to conduct surveys of the endangered Eastern indigo snake and other species on the land. “The family is so generous in sharing their time and energy,” added Stevenson.  “After we’ve worked all day out in the field, they feed us a magnificent dinner, including Pam’s homemade desserts, which the students love.”

Reese Thompson’s longleaf restoration work is significant.  But it becomes more important when seen in the context of his “neighborhood” in Wheeler County.  Reese’s brother, Frank who is also a longleaf conservationist, owns property adjacent to Reese. The Alligator Creek Wildlife Management Area is adjacent to Frank’s property.  Alligator Creek WMA was permanently protected in 2016 by the State as part of the Gopher Tortoise Initiative.  When you piece together ecologically managed private land holdings like the Thompson properties and land acquired and managed by the state, it helps create critically important corridors of good habitat for species like the gopher tortoise and Eastern indigo snake with scale.

The Gopher Tortoise: A Catalyst for Conservation
Scroll to top