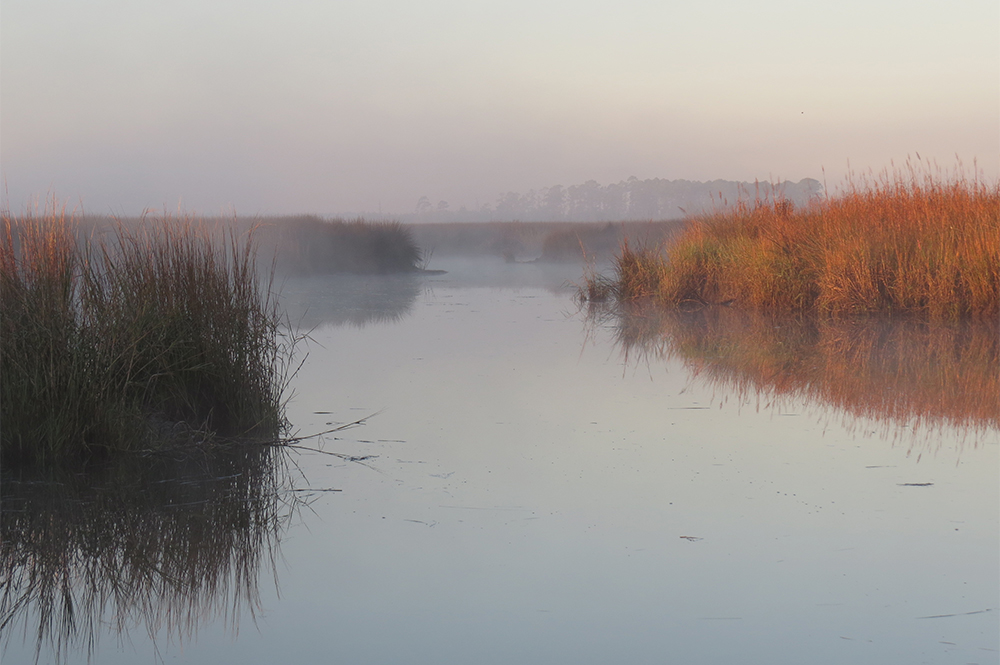 Looking at a map of Georgia, you see its boundaries marked by straight lines and sinuous river valleys. The most striking is our southern boundary with Florida, where a line arrows east-southeast to meet Georgia’s Big Bend – the 126-mile-long St. Marys River.

In 1800, it took the skills of Andrew Ellicott, a noted surveyor of the early American Republic, to mark the Georgia-Florida line. The west end was easy – the confluence of the Flint River with the Chattahoochee. But the eastern end was something entirely different – described as “the headwaters of the St. Marys River.”  The St. Marys rises in the Okefenokee Swamp, 700 square miles of wildness and myth that has come down to us today as a mixture of “the land of trembling earth,” the movie “Swamp Water,” and the antics of the swamp animals in the beloved Pogo comic strip. But it was a real-life problem for Ellicott. To run that line to its eastern terminus, he had to determine where swamp ended and river began.

To avoid clashes with the Seminoles who were increasingly hostile to surveying parties dividing the land between the United States and Spain, Ellicott sent most of his men eastward on foot to the riverside settlement of St. Marys. Ellicott sailed with the rest of his party and the instruments on a schooner around Florida to rendezvous with them there. Then the mapping task began, not on foot but by canoe upriver. If you have crossed the Okefenokee on a multi-day paddle, it’s a wonderful outing in wild nature. Ellicott’s paddle was strictly business. He and his men paddled back and forth, into and out of the swamp, until Ellicott was satisfied that he had located the St. Marys headwaters – where swamp became river. The survey party marked the site with a mound of soil which came to be known as “Ellicott’s Mound.” Now supplemented with an official federal benchmark, Ellicott’s Mound can even be located on Google Maps simply by entering its name.

Boundaries – natural and artificial – continue to influence management of the St. Marys watershed. Along its length, the river is bordered by two Georgia counties – Camden and Charlton – and two Florida counties – Nassau and Baker. Because they border both on the Atlantic and the more navigable sections of the St. Marys, Nassau and Camden historically have had higher population densities, which have only increased with the advent of coastal tourism and development. Charlton and Baker have remained more sparsely populated, although each is facing a growing need to implement smart planning and sustainable development.

According to Anna Laws, St. Marys Riverkeeper, a key to managing the watershed holistically is the St. Marys River Management Committee, composed of representatives from all four county commissions, their technical staff, private citizens, and entities like the Riverkeeper. All the counties are focused on improving water quality in the watershed. According to Laws, “These counties have porous soil and a shallow water table, especially in periods of heavy rainfall. So throughout the watershed, all the counties are grappling with high fecal coliform counts and nutrient inflow into the river. Traditionally, the more sparsely populated rural counties have relied on septic tanks for sewage treatment. In the past, homes along the river tended to be concentrated in fishing communities or privately-owned cabins used sporadically on weekends and vacations. Now more people are buying these sites and converting them for use as single-family, year-round homes.  If tanks are not pumped out on a three to five-year interval, the older septic systems simply can’t keep up with the demand on them.”

One innovative approach by Camden County and the Riverkeeper was obtaining grant funding to cover the cost of pumping out or replacing old septic systems bordering Horsepen Creek, a St. Marys tributary. The drop in fecal coliform counts was immediate and long-lasting.

An additional role that the Riverkeeper has taken on is water-quality monitoring throughout the watershed. “Our efforts are focused on supplementing the states’ monitoring programs. We are developing a baseline data-set both to look for monthly trends and, especially, to identify ‘hotspots’ in need of timely action. We have trained high school students and their teachers to conduct water quality monitoring tests so that they become our eyes on the watershed.”

Whether at the coast or inland, all four counties face the potential for explosive population growth, particularly because of the St. Marys’ proximity to northward sprawl from Jacksonville and Duval County. However, the needs of the counties are different. According to Laws, “Nassau and Camden Counties are densely developed and now must grapple with the results of past laissez-faire growth which has produced congestion and over-taxed wastewater treatment facilities. As counties in the immediate coastal zone, they also now are more focused on flood planning, either due to hurricane impacts or long-term sea-level rise. At a different stage of development, Charlton and Baker would welcome growth, as long as it’s smart growth and not at the expense of losing natural amenities or in repeating the mistakes made elsewhere.”

But desires for smart growth could be overwhelmed by powerful economic interests. Like many rural counties around the South, Charlton County is grappling with disposal of coal-ash waste from power plants. Despite the toxic heavy-metal content of coal ash, Georgia currently regulates coal-ash waste disposal no more stringently than it does household garbage. South of Folkston, the Chesser Island Road Landfill continues to receive ash not only from Georgia but also from a plant in Puerto Rico. That ash arrives via bulk-cargo ships which dock near Jacksonville and offload the ash into dump-trucks for transport to the landfill – a site less than five miles east of the Okefenokee Wildlife Refuge.

An additional threat to the Okefenokee, the St. Marys, and potentially the water supply for the whole region is the proposed expansion of surface mining. According to Laws, “Mining heavy minerals concentrated in the sands of ancient beach ridges has been carried out for many years at a relatively small scale in the region. However, this new proposal envisions an extremely large mine site close to the Okefenokee with unknown impacts to the hydrology of the swamp and the St. Marys, our invaluable groundwater supply, and impacts on endangered and threatened species.” Currently the U.S. Army Corps of Engineers is considering whether or not the proposal requires an environmental impact statement before its approval.

The St. Marys ties Camden County’s coast to the wild places it shares with Charlton County. For many years, the Okefenokee has been a tourist destination, not just to see alligators and cypress but to also for visitors to envision what the earliest people arriving there might have seen in 3,500 B.C.E.  To help build the sustainable growth of ecotourism in the region, the St. Marys Riverkeeper is in the process of working with the counties to improve access to the river by developing riverside parks and installing more boat ramps and canoe/kayak launch sites.

According to Laws, “Between Folkston and Moniac, which is close to the headwaters, there are not many places to get onto the St. Marys and enjoy what its blackwaters and riparian forests have to offer.  We’re currently working with Georgia River Network to expand access to paddling north of Folkston, the traditional head of navigation for traders plying the river.”

And so, maybe soon you will be able to re-enact Ellicott’s decision 220 years ago on where to draw the line — where a swamp becomes a river.

St. Marys Riverkeeper has two conservation projects underway that need philanthropic support. The first is the outreach program to educate homeowners along the watershed on best septic system maintenance practices. The second is the expansion of the water quality monitoring program to include not only bacterial tracking but also the collection of chemical and macroinvertebrate data. To support these efforts, contact Anna Laws at anna@stmarysriverkeeper.org.

Wildlife and Recreation on the St. Marys River

Stewards’ 2020 Field Events: Recreation and Respite in Our Coastal Surrou...
Scroll to top