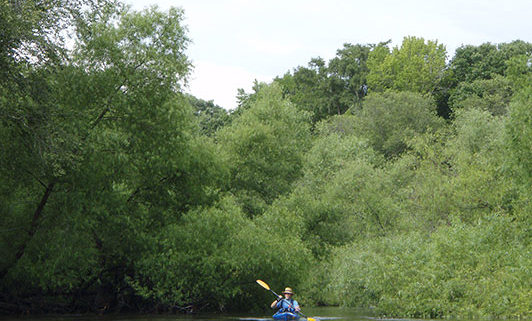 High in the Georgia Piedmont south of Union Point and Siloam, springs rise in two pastures to form the Ogeechee. Unlike most of Georgia’s rivers, whose headwaters are composed of creeks and streams bearing their own names, the Ogeechee is the Ogeechee all 250 miles from its springs to the sea.

The Ogeechee is one of the few Georgia rivers not held back by high dams to create major impoundments for hydropower and recreation.  But Piedmont settlers knew how to put the river to work. Where small waterfalls interrupted the river’s flow, enterprising locals constructed low mill dams to harness energy for everything from grinding corn to weaving fabric. 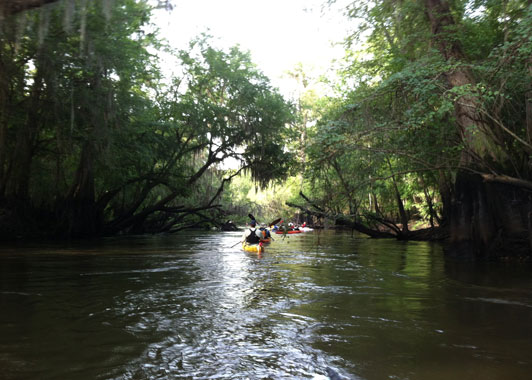 Below the Fall Line, the Ogeechee begins its meandering path to the Atlantic. Its slow-moving “black” waters offer plenty of opportunities for fishing and boating. But where the river bends, the Ogeechee narrows and trees crowd its banks. Willows grow so thickly on both banks of the river that a paddler may realize for the first time that willow leaves have a lovely fragrance. On the other hand, powerful currents carving the meanders undercut the bordering trees. Eventually they fall, clogging downstream passage with “strainers” that require either a portage around the obstacle or a saw to cut through it.

The wide floodplain of the lower Ogeechee is studded with thick stands of cypress. Along the riverbanks grow Ogeechee tupelos, first described by William Bartram in 1765. In flower these trees supply rich nectar for honeybees to process into tupelo honey. The fruit — the so-called Ogeechee “lime” — offers a tangy juice eaten right off the tree or when made into jelly. The cypress and tupelos also provide a stronghold for one of the south’s most elegant birds, swallowtail kites.

According to Ogeechee Riverkeeper Simona Perry, “Despite the impression of a largely rural landscape, this region of Georgia is experiencing increased development pressure from population growth, water withdrawals, and wastewater discharges as well as from climatic changes leading to sea level rise. These pressures are causing dramatic changes in water quality and quantity and threaten serious ecological decline.” But Perry is undaunted. “Ogeechee Riverkeeper continues to stand alongside local communities in this fight to ensure that our children have clean waterways, abundant wildlife and fisheries, and healthy communities for at least seven more generations.” 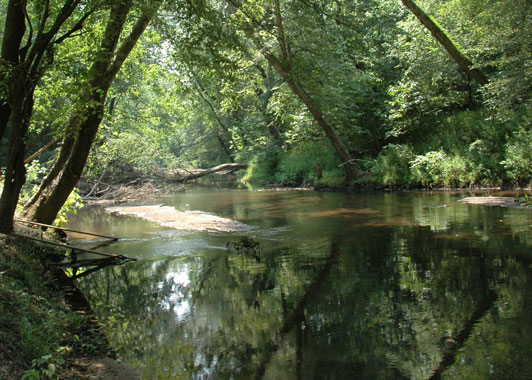 One of the largest landholders on the lower Ogeechee is the U.S. Army’s Ft. Stewart. Covering 274,000 acres, it is the largest military installation east of the Mississippi. In addition to protecting 14 miles along the river’s south bank, the base also encompasses a large portion of the Canoochee River watershed, the Ogeechee’s only major tributary. Working alongside state and federal agencies as well as private conservation groups such as the Ogeechee Riverkeeper and the Nature Conservancy, Ft. Stewart supports and manages populations of more than 20 state and/or federally-protected species. Some endangered or threatened species on the base include the red-cockaded woodpecker, the eastern indigo snake, the flatwoods salamander, the wood stork, and the shortnose sturgeon.

Very few people speeding south along I-95 probably glance west to notice the confluence of the Canoochee with the Ogeechee. Here the river widens and slows as the tide makes its presence felt. The river begins extravagant loops among the rectilinear remnants of rice field dikes, rice culture that once made coastal Georgia a world leader in exports. Flanked by saltmarsh, the Ogeechee finally meets the Atlantic between Wassaw Island National Wildlife Refuge and the Ossabaw Island Wildlife Management Area, protected at its very end as those waters from high in the Piedmont finally meet the sea.