Fat Meat Point, Saucy Boy Point, High-Low-Jack-and-the-Game Point, Spanish Cut, Wildcat Cut, Devils Elbow, Royal Lake — names leap from old navigation charts tracing the Savannah River as it winds from Augusta to the Port of Savannah. But following a century of dredging to straighten the river, many names have been forgotten. Now a study is underway to gauge the feasibility of restoring water quality and wildlife by making the river wind once more.

Like other Coastal Plain rivers, the Savannah meanders, carving sweeping curves across its wide floodplain. In transporting Georgia commodities from the Piedmont to the sea, boatmen navigating these curves — the “points” — gave them their sometimes colorful names. With time, as a meander loops more tightly, the river erodes a shortcut across its neck — think “Wildcat Cut” — separating the meander from the river’s main flow. The meander then begins to silt in. Now connected to the river only during floods, a marooned meander transforms into an “oxbow” lake.

In an effort to keep the Savannah River competitive as a means for commercial transportation, the U.S. Army Corps of Engineers regularly dredged its channels from the late 1800s until the completion of the New Savannah Bluff Lock and Dam in 1937.  Dredging resumed from 1959 to 1976 and, in the process, the Corps cut through the necks of thirty-two meanders to shorten the distance from Augusta to Savannah by twenty-six miles. Ultimately, barge traffic couldn’t compete with cheaper, faster rail and truck transport and by the late 1970s, the Corps stopped maintaining this section of the river.

Unfortunately, channelization’s impacts remain. Consider that the longer distance a river flows, the cleaner it becomes. Meanders slow down the water to allow more time for good bacteria to clean it.  During floods, the river reconnects with oxbow lakes, those lost wetlands that help break down and assimilate toxins.  In short, an artificially straightened river impairs water quality. 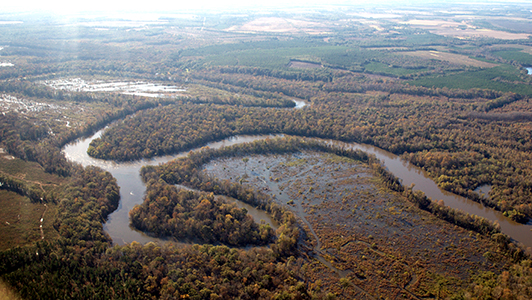 The Savannah River’s water quality has been especially challenged by post-war population growth and industrial development in the Savannah Valley. The river now receives waste discharges from forty-eight industrial sites and municipalities along one hundred-mile stretch, ranking it third on the list for toxic loads in Georgia rivers. Poor water quality affects fish and other aquatic organisms, increases water treatment costs for industry and cities, and impairs the public’s ability to enjoy a wide variety of recreation on the river.

Why not the Savannah?

A $3 million feasibility study slated for completion in 2019 should give us the answer. The Savannah River Cutoff Restoration Task Force includes federal and state agencies from Georgia and South Carolina, local municipalities like City of Augusta Utilities, the Georgia Ports Authority, non-governmental organizations, and for-profit businesses. The Savannah Riverkeeper and the Phinizy Center for Water Sciences serve as the non-federal sponsors for what Riverkeeper Tonya Bonitatibus calls “a project of historic proportion: the potential restoration of 23 meanders.”

Half of the $3 million cost for the study comes from mitigation funds related to the Savannah Harbor Expansion Project. But the feasibility study partners must raise the matching funds from non-federal sources. This presents a wonderful opportunity for conservation donors.  If you are interested in underwriting their work toward restoring this historic landscape, where place-names might no longer be only memories on a map, contact Tonya Bonitatibus at info@savannahriverkeeper.org

Photo by Savannah RiverKeeper; Illustration by Grabau, A Textbook of Geology, 1920.