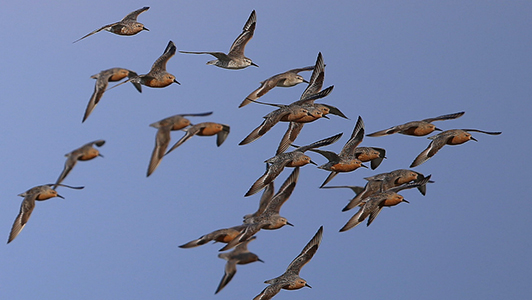 While few Georgians may realize how critical our coastal zone is to birds throughout the Western Hemisphere, the birds know.

On November 1, the Western Hemisphere Shorebird Reserve (WHSRN) announced the designation of a wide swath of Georgia’s barrier islands and marshes as a “Landscape of Hemispheric  Importance.” As the 100th site recognized for its importance to shorebird migration, it is only the third designated at the “landscape” scale. This new WHSRN Landscape comprises 79,709 acres of critical habitat including beaches and dunes, offshore sand bars, extensive sand and mud flats exposed at low tide, as well as salt marsh on the lee side of the barrier islands.

This Landscape supports 35 species of shorebirds during some part or all of their migratory cycle. To understand its importance, look at a few numbers. The Georgia Barrier Islands WHSRN Landscape supports more than 30% of the biogeographic population of rufa Red Knot, with approximately 23,400 of these birds resting and refueling during their southbound migration and 17,775 on the northbound return. The Landscape also supports large numbers of overwintering birds such as the Great Lakes breeding population of the Piping Plover, along with American Oystercatcher, Short-billed Dowitcher, and Black-bellied Plover. Attracted by the abundance of fiddler crabs, one of the largest gatherings of Whimbrel in North America assembles here to fatten up before departing for breeding grounds around Hudson Bay and in the high Arctic of the United States and Canada. 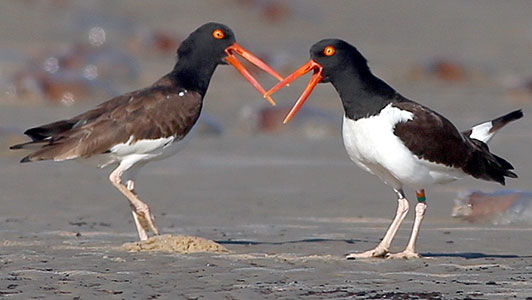 Georgia’s barrier islands are owned and managed by a diverse group of private and public entities, many of which have committed to the WHSRN designation. The Georgia Shorebird Alliance (GSA), a collaborative group of biologists, land managers, and organizations devoted to the protection of Georgia’s shorebirds, submitted the nomination. Commitment to the nomination comes from GSA members, including the National Parks Service (Cumberland Island National Seashore, Fort Pulaski National Monument), U.S. Fish and Wildlife Service (Savannah Coastal Refuges Complex), and the privately-owned Little Cumberland Island, St. Catherine’s Island, Little St. Simons Island, and the Cannon’s Point Preserve and Musgrove Preserve on St. Simons Island. The Landscape of Hemispheric Importance also includes the Altamaha River Delta, previously designated in 1999 by WHSRN as a Site of Regional Importance.

Many of us cherish the opportunity to stroll Georgia beaches alongside flocks of small shorebirds, watching the “peeps” as they diligently patrol the swash zone for food. For more details about how these shorebirds stitch our coast into a web of vital connections stretching from the Arctic to Tierra del Fuego, please see https://www.whsrn.org/georgia-barrier-100th