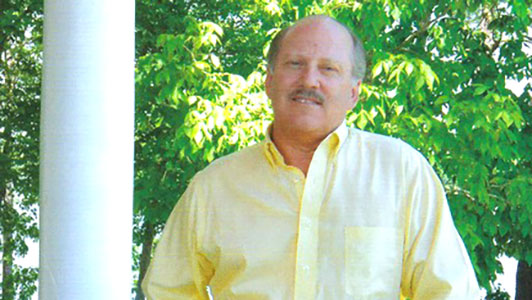 “Small towns are generally smack in the middle of nature,” observed Dr. John W. “Rick” Richards, Jr., “and my hometown of Kershaw, South Carolina, was no different. I spent most of my summers, and much of the shoulder seasons at Lake Wateree down stream from the Catawba River:  catfishing, frog gigging, skiing, and swimming. When I was 15, my parents decided to build a cabin at the lake and challenged me to design and build it. They bought a ski boat and told me that if I recruited friends to help and we worked from 8am-6pm, my friends and I could ski from 11am-2pm.  My parents saved on labor, bought many, many gallons of gas, and my friends and I spent a lot of time at the lake over the next three years building the ‘River Cabin,’ which is unchanged and still being used today – 50 years later.”

Having grown up on the lakes and rivers of northern Georgia and South Carolina, it’s no wonder that Rick feels a close connection to the region’s waters and uses his philanthropy to protect them.

Throughout Rick’s life he’s always sought out water – as an undergraduate, a medical student, during his posting at Ft. Gordon while in the Army, and later when settled in Augusta as a faculty member at the Medical College of Georgia. The Richards family spent a lot of time at Lake Thurmond and by 2005 had decided to move there. After several months searching for lake property, they found land offering a sweeping vista of the Savannah River and the Sumter National Forest beyond.

The water quality on Rick’s section of the Savannah is very good. “The river temperature is a bit chilly for a lot of watersports but fishing and boating go on year-round,” says Rick. “One issue that I have become aware of is the need for better enforcement of erosion control laws. Due to uncontrolled runoff from new developments, even those well away from the shoreline, a portion of the Savannah became clogged with silt very quickly. We need to protect the river for all its users, wildlife included.”

After teaching at MCG for seven years, Rick began a new phase of his life as a “serial entrepreneur” in fields including health promotion and disease prevention, health data management, medical consulting, and cost containment. His business successes inspire his philanthropy.

One environmental group supported by Rick’s philanthropy is the Savannah Riverkeeper (SRK). Riverkeepers generally work at the grassroots level to protect everyone’s right to clean water.  They do this by focusing on the health and well-being of a specific watershed and the communities it supports. As the primary guardian of the Savannah River, SRK’s challenge is significant.  The organization works to protect a river system that spans nearly 400 miles with stakeholders in two states.  All of Georgia’s six Riverkeepers are part of the Waterkeeper Alliance, founded in 1999 by Robert Kennedy and a group of fishermen who set out to clean up the Hudson River in New York.  The movement took off, and now there are over 300 Waterkeeper organizations worldwide.

Rick’s connection to SRK began when he saw the news that burglars had stolen all of the organization’s computers during a break-in. “I was in the process of replacing my work computers so I took equipment to the Riverkeeper office and helped them get back to protecting the river again.” In addition to his financial support, members of Rick’s Boy Scout Troop have partnered with the SRK on a number of Eagle Scout Leadership Projects.  The Scouts of Troop 643 (Evans, GA) erected information kiosks at boat/kayak/canoe access points on the river, installed fishing line recycling bins at boat landings, cleaned and placed trash receptacles in access areas, cleaned the shoreline of Lake Olmstead, built an outdoor classroom at Phinizy Swamp and even painted and landscaped the SRK office building.

“The people who are employed by environmental groups could choose to work where they would earn a lot more money; yet, this is their calling. They make a financial sacrifice to do great things — what I call ‘God’s work.’” Rick continued, “I want this community to thrive and so do they. When they need additional funds and/or labor to accomplish what we all are trying to achieve, all I have done is offer a bit of help.”

Rick Richards shares his lifelong love of rivers with his family and his community. “The closer I can get to water, the more appealing it is to me. Walking along the river or simply sitting and watching it roll by has such a calming influence. It connects one with the world beyond….”

The Gopher Tortoise: A Catalyst for Conservation