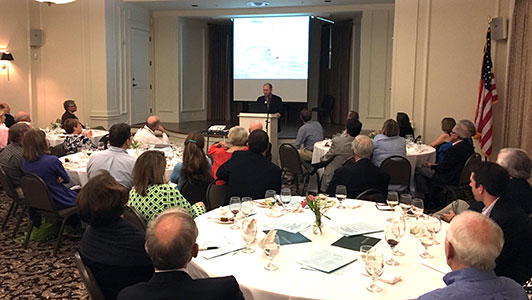 An enthusiastic group of 55 participated in the 2nd Annual Conservation Donors Roundtable on March 9th at the A. W. Jones Heritage Center on St. Simons Island.  Co-sponsored by Stewards of the Georgia Coast and the Communities of Coastal Georgia Foundation, the Roundtable is an opportunity for donors to learn together about coastal conservation and the varied ways that donors go about their conservation philanthropy.

With a population estimated at roughly 450, right whales’ status as a critically endangered species is a legacy of the commercial whaling industry.  Contemporary threats include entanglement with fishing gear and collisions with ships, though the latter has been diminished somewhat by the adoption of mandatory speed limits.

Right whales spend much of the year in waters off Canada and New England but they migrate each winter to the Georgia and Florida coasts to give birth.  DNR biologists, along with their partners at NOAA, Florida Fish & Wildlife and Sea to Shore Alliance, monitor the population by flying aerial surveys and doing research from small boats.  They are particularly interested in documenting calving rates and searching for whales that arrive entangled in commercial fishing rope.  When possible, they work to free the whales by cutting away heavy rope and other gear, much of which originates in Canada and New England.  (View a dramatic video that captures such a rescue.)

When asked about options for funding right whale conservation, George explained three options.  “Georgia residents can purchase hummingbird and bald eagle license plates for their vehicles.  Donors can make contributions via T.E.R.N. (The Environmental Resources Network), the friends group which raises funds for DNR’s Nongame program.  They can also contribute directly to right whale conservation by supporting Sea to Shore Alliance, a small nonprofit that runs our aerial survey project.”

Following Clay George’s presentation, a donor panel featured Walter & Judy Hoyt, longtime donors to Georgia DNR’s Nongame program. With a shared interest in science and nature and a love of the outdoors, it’s not surprising that conservation philanthropy has been a longtime passion.  Reflecting on their philanthropy, they emphasized the importance of volunteerism with their children and observed they they’ve typically provided philanthropic support for organizations for which they volunteered first.  Having vacationed on Sea Island over the years, the Hoyts have been impressed with DNR’s nongame conservation work which is funded primarily by federal grants, license plate revenues and private donations.  True to form, Walter volunteers as a board member of T.E.R.N.  Nongame DNR’s friend’s group has become the Hoyts’ primary vehicle for conservation philanthropy on the coast.

Challenging the Storage of Coal Ash In Wayne County Landfill