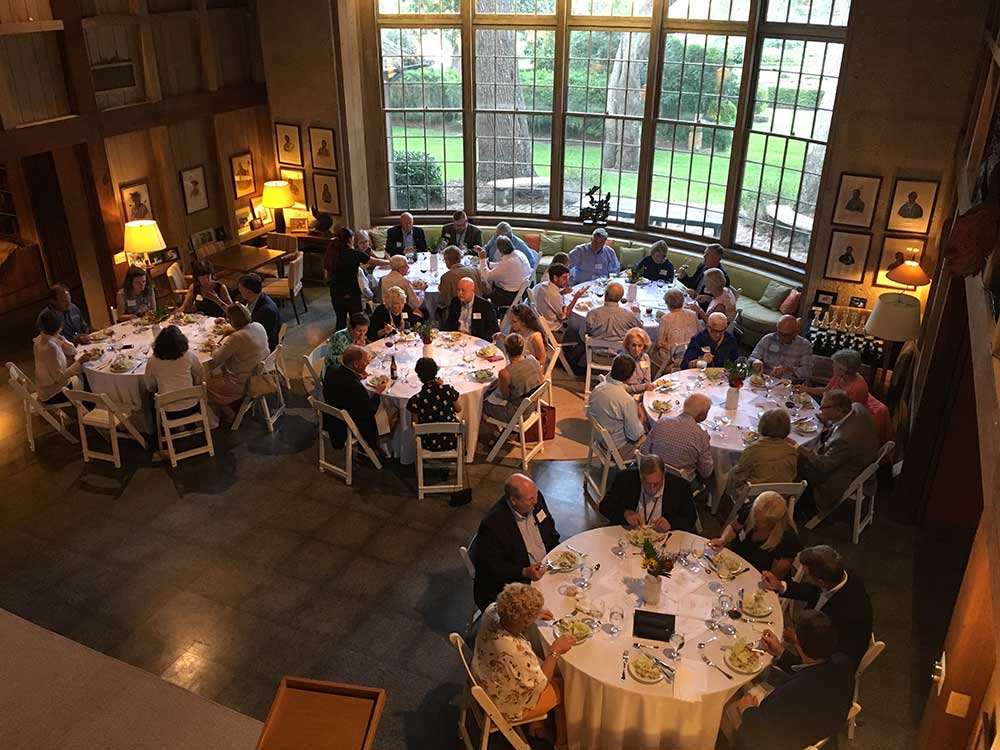 Co-hosted by Stewards of the Georgia Coast and the Communities of Coastal Georgia Foundation, the Conservation Donors Roundtable has become an annual tradition in the Golden Isles.  Roundtable hallmarks include an audience between 45 – 50 people, great fellowship and food, and an exploration of the intersection between private philanthropy and major conservation opportunities and challenges.  In each of the first three programs, speakers focused on conservation of iconic coastal wildlife. The 4th Annual dinner event, held in September at Musgrove Retreat and Conference Center, broke new ground with a look at nature-based economic development and, in particular, the construction of walking and bike paths across Georgia’s coastal region.

2019 keynote speaker Ed McMahon, the Charles E. Fraser Chair on Sustainable Development and Environmental Policy at the Urban Land Institute, presented the audience with a fundamental question:  should new development shape the character of the Georgia coast or should the character of the Georgia coast shape new development? Choosing the latter clearly implies choosing development that celebrates, preserves, and enhances the region’s cultural, natural, and community resources and, in particular, the coast’s distinctive landscapes.  This approach is often termed asset-based economic development and, more specifically, nature-based economic development.

McMahon highlighted successful communities across the country where leaders chose this route.  Common characteristics include the cultivation of a sense of place, distinctiveness, and quality of life for residents and visitors alike, in large part, by investing in historic town centers and outdoor amenities like walking trails and bike paths and protecting and enhancing nearby natural resources like parks, waterfronts, and other natural assets.  In a perfect segue to the evening’s second speaker, McMahon closed by observing that walking is the most popular form of outdoor recreation nationally. In fact, walking trails and bike paths have risen to the top of community amenities most sought by homebuyers (April 2014, National Association of Realtors/Homebuilders).

The Roundtable’s second speaker was Brent Buice, South Carolina & Georgia Coordinator for the East Coast Greenway, a non-profit organization working to connect 15 states and 450 cities and towns from Maine to Florida with an uninterrupted safe walking and biking route.  Not surprisingly, the proposed path through Georgia features the length of Georgia’s coastal region.  The good news is that nearly 100% of the proposed route is under public control.  The challenge:  most of the community level planning, fundraising, and construction needed to bring the coastal path to life is yet to be done.  That said, examples of high-quality bike paths already exist in coastal Georgia and they provide a foretaste of what’s possible.  Buice noted that where Georgia trails do exist, local communities have documented an uptick in visitors and business income attributable to people who are interested in getting off the interstate to experience nature at less than 70 mph.  From paths on St. Simons Island to recently constructed paths in Camden County, one can imagine the impact of having a path that connects the entire region and communities in between.  Private philanthropy will play a pivotal role in bringing that dream to fruition.

Following the tradition enjoyed by previous Roundtables, Georgia DNR’s Wildlife Conservation Section was well represented when Jason Lee provided an update on wildlife conservation in coastal Georgia.  Finally, the evening closed with a coastal donor speaking very personally about her philanthropic commitment to coastal Georgia born of her love of the outdoors and, in particular, her fondness for paddling the creeks and waterways of the region.  Marsha Certain, MD makes her home in Darien, Georgia where the Altamaha River is always in sight and a kayak is always near.  Marsha’s philanthropy and volunteerism merge with her service on the board of the Nature Conservancy in Georgia.

To be reminded that Georgia’s coast is an environmental gem, all a Roundtable participant had to do was gaze out of Musgrove’s windows onto the saltmarsh at sunset. Our coast’s biological, aesthetic, and cultural richness deserves nothing less than our best efforts in stewardship and philanthropy.

To learn more about Stewards of the Georgia Coast’s efforts to support sustainable development, green infrastructure, ecotourism and smart growth, please review our 2019 Coastal Conservation Project List. From The Nature Conservancy’s living shoreline pilots at Wormsloe and Harris Neck to the Georgia Conservancy’s sustainable community planning in Brunswick, there are great opportunities to get involved.

Save the Dates: Upcoming Stewards Events
Scroll to top