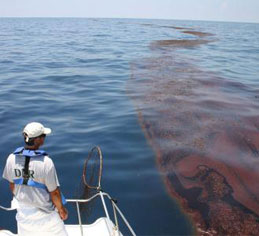 Offshore drilling has been taken off the table for Georgia and other Southeastern Atlantic States by the Department of the Interior’s Bureau of Ocean Energy Management for at least five years.  It is a tremendous victory for marine wildlife and Georgia fisheries, especially bottle-nosed dolphins and right whales.  But it’s temporary and the threat of seismic testing remains.

On March 15, 2016, the Department of the Interior’s Bureau of Ocean Energy Management (BOEM) released the draft of a five-year lease program (2017-2022) for the United States Outer Continental Shelf. The original federal government plans included allowing drilling off the coast of Georgia and other Southeastern Atlantic states, but reversed that decision in March 2016 after vigorous public opposition led by conservation organizations and concern voiced by many individuals and citizen leaders.

Unfortunately, the Georgia coast will be included in a “Target Lease Sale Option” in 2021, and BOEM is currently processing permits for seismic testing in the Atlantic Ocean. Organizations like One Hundred Miles and the Southern Environmental Law Center have been closely tracking and leading the challenge to permitted activities that threaten offshore resources and wild places on the Georgia coast.

Visit their websites for additional information and up-to-date action items to help protect our marine waters, fisheries and wildlife.